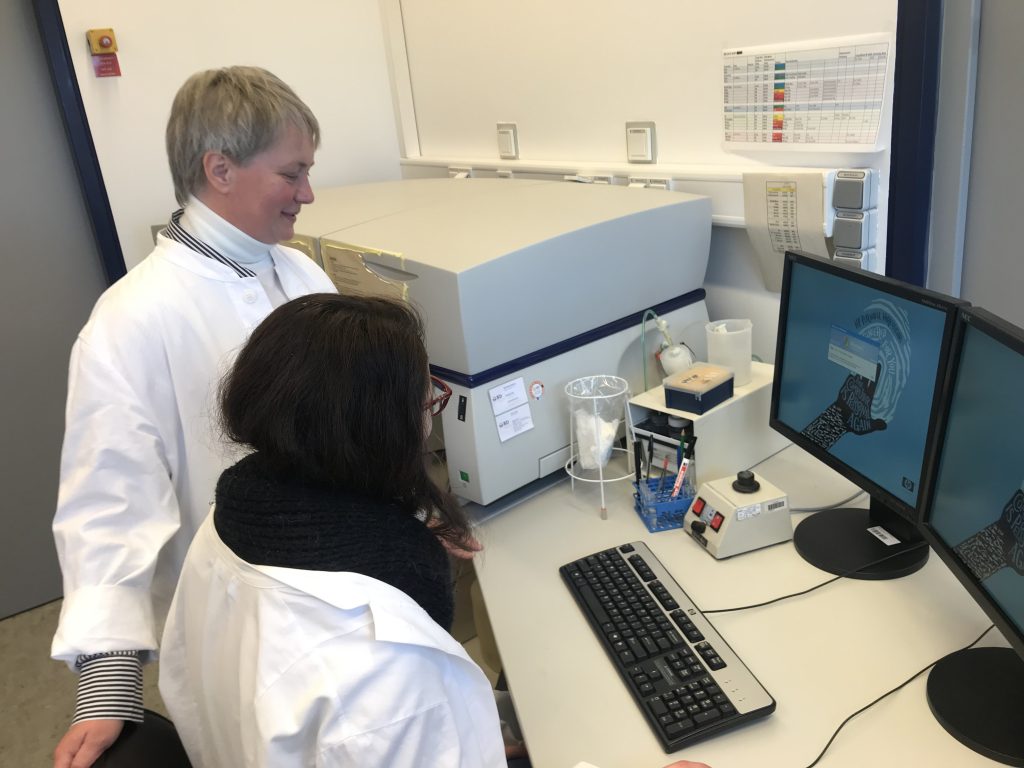 On realization of joint Ukrainian-German project “Interplay between biochemical and immunological processes in mice under pre- and cancerous liver states“ (with support of the German Academic Exchange Service (DAAD)) as one of the leaders of  Ukrainian team Professor of Department of Biochemistry and Biotechnology of Vasyl Stefanyk Precarpathian National University (PNU) Halyna Semchyshyn in late November/early December 2018 visited MEDIZINISCHE HOCHSCHULE HANNOVER (Hannover High Medical School – one of the best Medical Universities of Germany).  She was officially invited by the leader of German partner group Doctor Tetyana Yevsa (https://www.mh-hannover.de/ag-yevsa.html). This collaboration was started in 2016, when initiated by Professor Olga Garaschuk (https://www.cin.uni-tuebingen.de/about-cin/people/cin-members/person-detail/prof-dr-olga-garaschuk.html) from the Eberhard Karls University of Tübingen (Tubingen, Germany)  and supported by DAAD summer school “Perspectives for young scientists in life sciences: mastering global challenges of the modern society” (https://www.youtube.com/watch?v=Hzl2Pbdkiso

https://kbb.pnu.edu.ua/research/science-events/ukrainian-german-summer-school-2016/) was carried out at Department of Biochemistry and Biotechnology of PNU.  In the frames of such collaboration two more joint projects were supported by DAAD. In 2017, the leader of the Ukrainian team Professor Volodymyr Lushchak visited German partner, which resulted in detalization and extension of collaboration.  In the frames of the joint projects in 2017, two Master Students from the Department of Biochemistry and Biotechnology of PNU Maria Holovchak and Nataliia Petriv worked for three months in the laboratory of Dr. T. Yevsa (https://kurs.if.ua/news/frankivski_studentky_vygraly_stypendiyu_leonhardeulerprogramm_foto_58144.html), and Nataliia Petriv continues such collaboration as Ph.D. Student of  the Hannover High Medical School under supervision of  Doctor T. Yevsa (https://kbb.pnu.edu.ua/en/2018/08/01/an-alumni-of-the-department-of-biochemistry-and-biotechnology-became-a-phd-student-at-the-hannover-medical-school-in-germany/). In 2018, two more Ukrainian Master Students Anastasiia Hrushchenko and Lesia Sishchuk (https://kbb.pnu.edu.ua/en/2018/08/16/our-master-students-lesia-sishchuk-and-anastasiia-hrushchenko-have-won-leonard-euler-scholarship-2018-2019/) for two months  worked in the laboratory of Doctor T. Yevsa.

Proffesor H. Semchyshyn and Doctor T. Yevsa discussed results of coperation, ist efficiency for training of Ukrainian students with utilization of facilities and skills of German partners and bilateral transfer of knowlege between collaborating teams. Especial attention was paied to perspectives and potential application for big joint grants.

In addition, on invitation of Professor Sigurd Lenzen (https://www.mh-hannover.de/34806.html?&L=1), director of Institut für Experimentelle Diabetologie, Zentrum Biochemie,  Professor H. Semchyshyn gave a lecture “Glycoxidation: interplay between oxygen and carbonyl reactive species” in the Institute.  The interest to such lecture was initiated in summer 2018, when Professor Lenzen visited Department of Biochemistry and Biotechnology of  PNU, gave several very interesting lectures, and had long discussions (https://kbb.pnu.edu.ua/en/2018/07/02/visit-of-professor-sigurd-lenzen-2/). The lecture of Professor H. Semchyshyn was devoted not only to theoretical aspects of reactive oxygen and carbonyl species involved in nonenzymatic reactions, but also biomedial aspects of interaction between the above mentioned species and diverse components  of organisms and their roles in development of pathologies, particularly diabetes mellitus and its complicaitons. Also perspetives on collaboration between German and Ukrainian teams were discussed during several rounds of nonformal meetings. 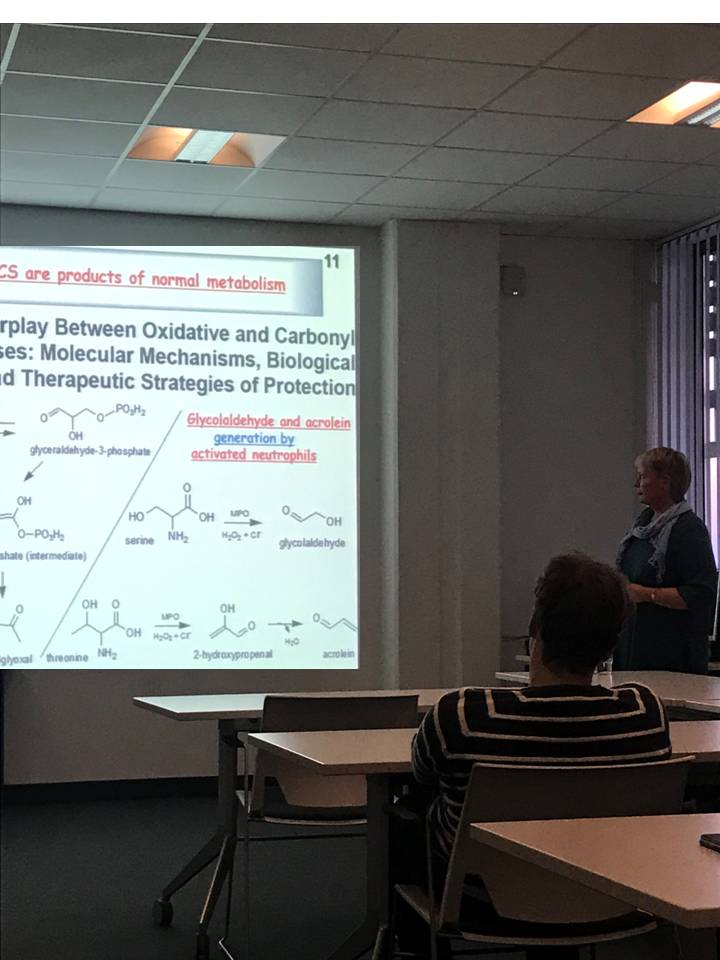 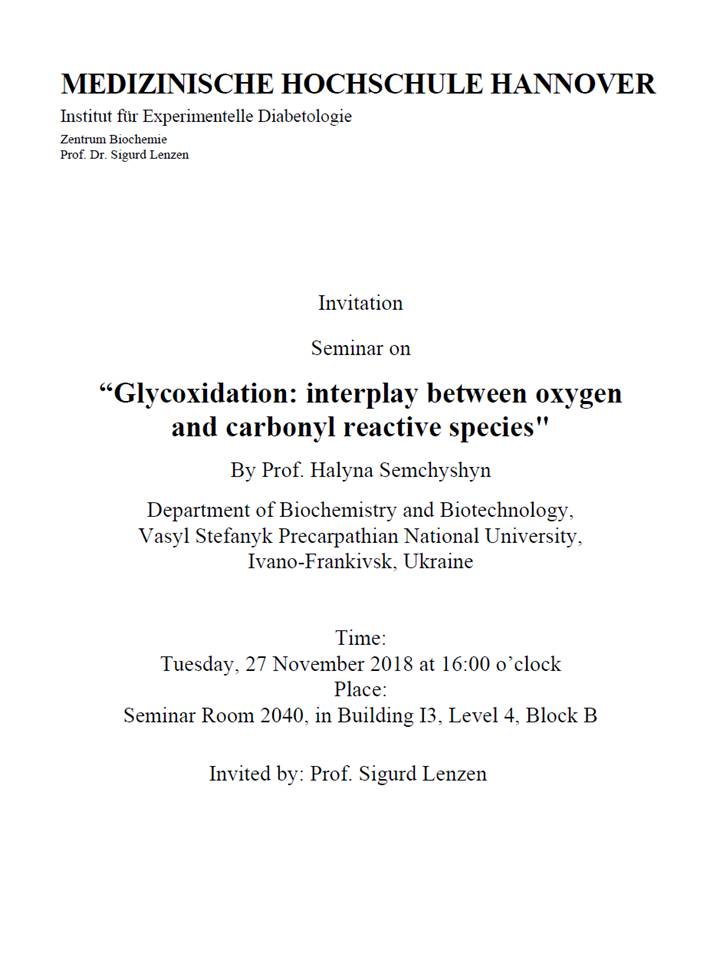